Noteworthy Items: (1) Depth: Experience was an issue throughout the season as just four starters returned from the 2020 team that finished second in the state.  Back for his junior year was All-Ohio running back Willtrell Hartson.  He was joined by senior defensive back Austin Brawley and senior offensive linemen Jaiden Woods and Toddrick Lee.  (2) Injuries: The Tigers lost both starting quarterback Darrius McElroy and starting running back Hartson to injury in Game 5.  Hartson, who had gained 736 yards and scored nine TDs through the first four games (including 287 yards against Warren Harding) was lost for the season.  That position wasn’t settled again until Week 10 when Freddie Lenix Jr. (102 carries for 778 and 11 TDs), was inserted into the lineup.  McElroy was replaced by Jalen Slaughter, who performed admirably for a freshman (89 of 152 for 1,384 yards and 16 TDs).  Meanwhile, McElroy was a factor again starting in Week 10 as a wildcat quarterback (84 carries for 434 yards and 11 TDs).  Also, injuries to several offensive linemen required constant reshuffling of the lineup.  Combined with the impact on the skill positions, Massillon was constantly reinventing the offense.  (3) OHSAA Suspensions: During the past couple of seasons the Tigers were the benefit of several transfers from Beachwood.  Prior to the game against Austintown Fitch a complaint of transfer impropriety was filed with the OHSAA and all of the Beachwood players were suspended for that game.  Within a week the players were cleared of any wrongdoing and all returned to the field.  But it was yet another disruption to the season.  (4) Offense:  Despite the aforementioned issues, the offense still performed better than average, particularly in the run game.  This phase averaged 5.6 yards per carry, which is ranked 4th among all Massillon spread offenses.  Both Hartson and Lenix posted outstanding numbers, with 7.3 and 7.6 yards per carry, respectively.  These performances are also ranked 3rd and 2nd respectively among all spread offense starting running backs.  Incidentally, the No. 1 rank belongs to Hartson (8.1) in 2020.   Adding to the mix, Camden Beasley and McElroy combined for 891 yards at 5.3 yards per carry.  The passing game was right on average.  (5) Defense: In spite of all new players in the defensive front-7, the Tigers were able to fashion one of the best run defenses they have seen in the 24 years of defending spread offense football.  The group gave up just 92 yards per game on the ground (ranked 1st) and 2.8 yards per carry (ranked 2nd).  Linebacker Nathan Depuy set a new record with six fumble recoveries, Nate Watkins tied the record for 70 yards in tackles for loss and Riley Campbell’s 3.0 quarterback sacks against Austintown Fitch is second in the record book.  The secondary provided good run support, but it struggled against the pass, giving up 198 yards per game (the highest of any previous Massillon team) and 6.7 yards per pass, also a telling number.  Several factors contributed this statistic: (a) inexperience, with just one returning starter; (b) stature, with most of the players on the shorter side, which caused problems in defending the 50:50 balls against taller receivers; (c) many opponents opted to forego the run game, since the Tigers were so good in this area; and (d) having to face an abundance of outstanding passing quarterbacks.  (6) Special teams: Austin Brawley was the catalyst as he set several new records by the end of the season.  They included 447 punt return yards (1st) and three touchdowns (tied for 1st), including 140 return yards against Canton GlenOak (1st), 20 kickoff returns (1st) for 479 yards (2nd) and seven blocked kicks (1st), eclipsing the previous record of three.  Kickers Shane Rue and Nolan Hendricks combined to convert 49 of 50 extra points and 9 of 14 field goals.  (7) Streak: Massillon entered the season with a 31-game winning streak against public schools.  The streak came to an end in Week 1 with a loss to Pickerington Central, which finished the season with a 12-2 record and a loss in the Division 1 regional finals.  (7) Canton McKinley game: The Tigers erased a 13-7 halftime deficit and ran away with a 35-13 victory.  It was their 6th win in a row in the series and 10th in the last 11 games.  Newly inserted running back Freddie Lenix Jr. rushed for 179 yards and scored two touchdowns.  Alternate quarterback Darrius McElroy added another 89 and tallied twice.  McElroy was named game MVP by the Great American Rivalry Series.  (7) Playoffs:  With a win over previously undefeated Big Walnut, Massillon advanced to the Division 2 regional finals in a bid for a 5th straight championship, but lost to Green, 26-25.  An unprecedented 30 penalties were called during the game, 20 on  Massillon.  True to form, the game was decided on a controversial pass interference call that erased an Austin Brawley pass interception on a Green 4th down play near the end zone.  Green’s quarterback threw 57 passes against the Tigers, more than any previous Tiger opponent.  He completed 31 and converted four touchdowns.

The Big Walnut and Green games were held at Mansfield’s Arlin Field Stadium. 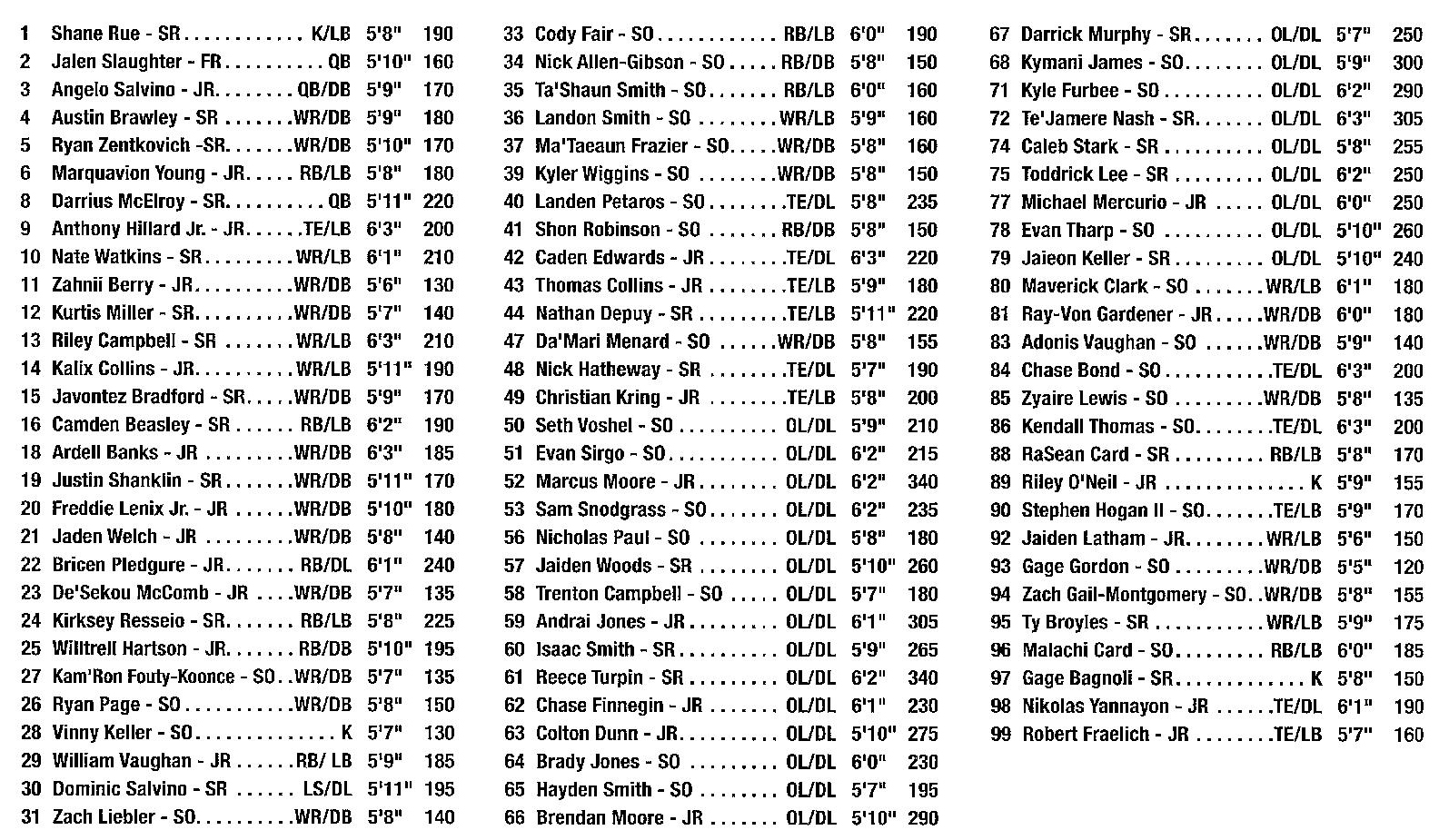