Noteworthy Items: (1) Virus Impact: The Covid-19 Pandemic caused a major disruption to the season, affecting nearly every aspect of the Massillon program.  Safety protocols were instituted to limit the exposure of the virus among the players, coaches and opponents.  The Tiger program did a great job managing this situation and no players or coaches were found to be affected during the season.  In a compromise with the OHSAA and the Ohio Department of Health, all of the state’s original 10-game schedules were voided and limited to six games, forcing all teams to remake their slates in short notice.   Plus, all teams were eligible to participate in the playoffs, with the playoffs completed before Thanksgiving, given the fear of a virus rebound as winter approached.  As a result, Massillon had to scramble to generate an entire schedule within a period of two week, while hampered by the loss of any team that was a member of a league.  In the end, they lost potential openings games against first Nevada Bishop Gorman and then Pickerington North.  With leagues opting to schedule exclusively within their own ranks, independent teams like Massillon were left with scheduling each other, except for the game against Canton McKinley.  As a result the Tigers faced both Lakewood St. Edward and Cleveland St. Ignatius. All off-season team workouts were canceled.  Pre-season scrimmages were canceled.  Fan attendance was limited to families of team and band members only.  Live internet broadcasts were made available for the general public.  Bands were not permitted to travel to away games.  Most Booster Club events, such as the Duncan Plaza Kickoff and McKinley game festivities, were canceled or held online.  (2) Playoffs: Massillon advanced to the Division 2 state finals for the third year in a row, losing to Akron Hoban 35-6.  The Tigers captured their fourth consecutive playoff regional title (14th overall) with a 43-13 victory over Massillon Perry.   In the state semifinals, the Tigers revenged the previous year’s state finals loss to Cincinnati LaSalle with a 17-14 victory.  (3) Milestone games: Massillon defeated Canton McKinley 35-7, marking the fifth victory in a row in the series and nine of the last ten.  The Tigers won their 900th all-time game (3rd in the country) with a 35-0 win over Columbus Bishop Sycamore.  Massillon won its 500th game at Paul Brown Tiger Stadium by defeating North Canton Hoover, 48-23. (4) Streaks: The 21-game regular season winning streak (5th all-time) was stopped by Lakewood St. Edward, 24-23; the Tigers winning streak (regular season and playoff games) against public schools was extended to 31 games.  Massillon won ten games in a row, with bookend losses to St. Edward and Hoban.  (5) Records: Sophomore Willtrell Hartson rushed 324 yards against Westerville South in the playoffs, eclipsing the mark set by Travis McGuire (302 yards) against Canton McKinley in 1991; quarterback Zach Catrone completed all ten pass attempts against Massillon Perry, a feat never before accomplished (min. 10 passes attempted); he also set a single-game mark for quarterback efficiency with a rating 396, pushing past Aidan Longwell’s 322, which was set in 2017; wide receiver Jayden Ballard set a new record for career pass reception yards (2363) and touchdowns (37);  kicker Alex Bauer established career marks for total attempts (213) and total conversions (205); he also tied the record for field goal percentage (77.8); punter Magnus Haines set new career records for punt attempts (119) and punt yards (4,405); Caiden Woullard tied the record for career quarterback sacks (8.5).  (6) Miscellaneous: Ballard was invited to participate in the Under Armour All-American All-Star game; unfortunately, the game was canceled due to the Covid-19 Pandemic.  The guest speaker at the annual Spring kickoff was Ryan Day, head coach of The Ohio State Buckeyes.

The Cincinnati LaSalle game was played at Marysville Impact Stadium

Note: The attendance limit for each game was controlled and reduced by the Ohio Department of Health due to the risk of spreading the Covid-19 virus. 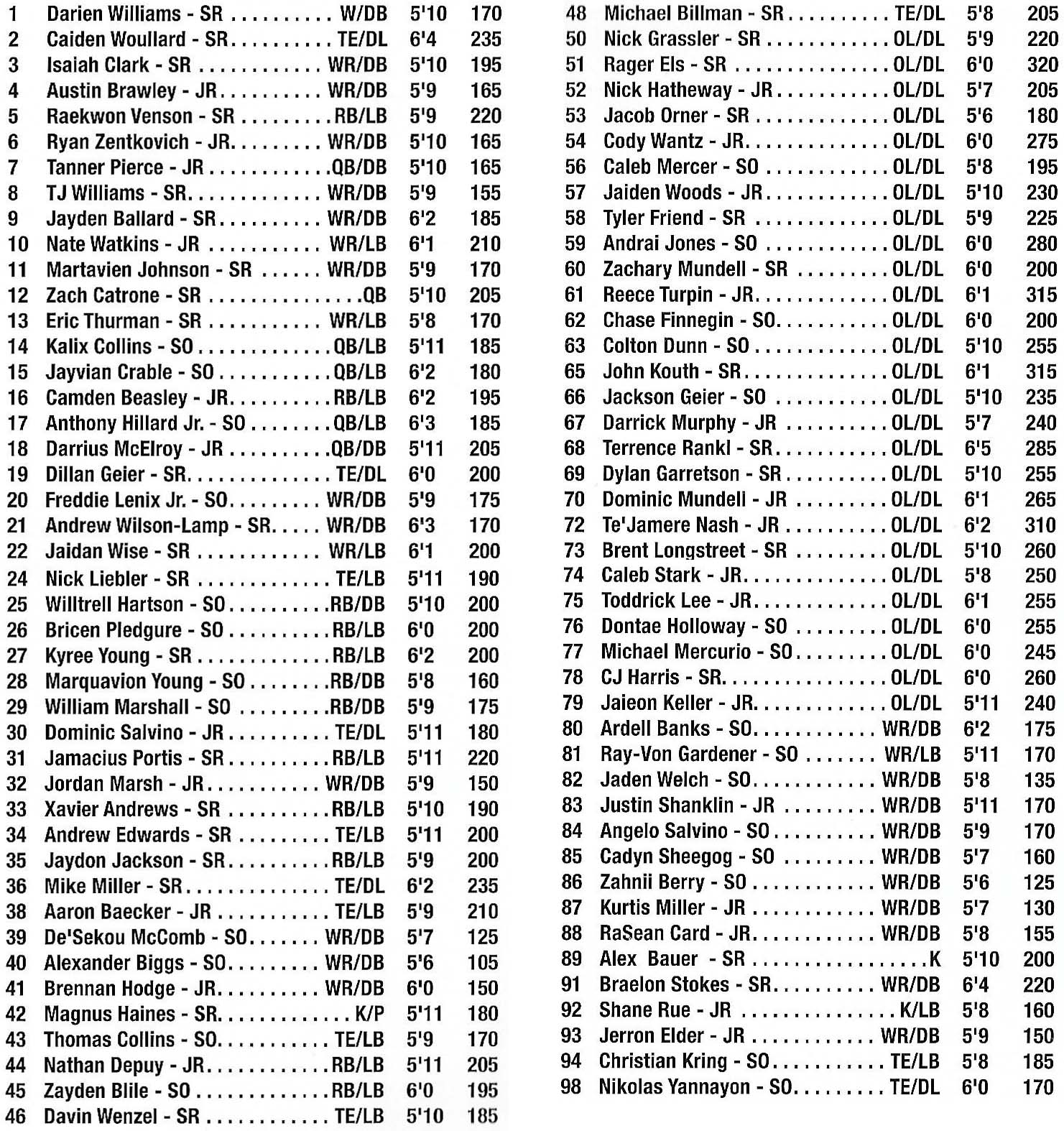