With the goal of developing a new website header to help modernize the Massillon Tiger Football Booster Club Website, the members turned to the students of Washington High School.  The task was presented as a contest and it fell immediately to the Media Arts & Communication Department, which eagerly accepted the challenge of solving this real-world problem.  The students’ talents were readily applied, multiple entries were submitted and some auspicious Booster Club judges reviewed each one.  But in the end, it was a combination of artistic design ideas from the various entries that was used to create the final website header shown above.

It was in 1967 that WHS made its first venture into world of audio-video broadcasting when a group of students recorded the Tiger football games for later airing on Massillon Cable TV.  The undertaking was accomplished as a club project under the guidance of Dick Gessner, who trained the students over the summer and prepared them for the task at hand.

Later, at the request of Superintendent Al Paris, the club approach was converted into a classroom elective.  Now, some fifty years later, it has evolved into a formal curriculum of instruction, called Media Arts & Communication.  A part of Career Technical Education, it accepts around 24 junior students each year for the 2-year program.

The current instructors are Dave Scheetz and newcomer Matt Ferrell, a 1993 WHS graduate of the Media Arts program.  Mr. Scheetz has been with the program now for 28 years, after previous broadcast work for ESPN990.  He couples his current employment with support work for both WHBC (pre-production and play-by-play for the Game of the Week) and Massillon Cable TV.

First-year teacher Mr. Ferrell worked as a DJ, nightclub owner and video store owner during high school, and then later as a show producer, technology trainer and theater designer.  He has also delved into other media-related activities, such as software training, all while continuing his broadcast education.

“Both of us have had success in various aspects of the industry and we both feel like we have a lot of experience that we can share with the kids,” said Mr. Scheetz.

“We have a situation where we have 24 reserved seats for juniors,” said Mr. Scheetz.  “That number will vary from year to year.  If we have 25 or more sophomores interested in the class then we go through an interview process.  We want to find what the likes and dislikes of these candidates are, do they have a history of doing anything as a hobby prior to this class, TV-related, film- related, music recording-related, anything that ties into what we do.  We also look at attendance.  We also look at grades.  And we also look at teacher recommendations.”

The coursework touches base on all aspects of what goes into making a video, with each course covering pre-production (setup), production (recording), post-production (software editing) and distribution (release to various media).  All skill levels are addressed in each class, but are presented in more detail as the student progresses through the program, from simply operating a camera to developing a final edited format.  “Those same stages of production have been there forever,” said Mr. Ferrell.  “But the way we’re getting there, the tools we are using to get there, that’s what’s changing.”

Naturally, there is a heavy emphasis on sports broadcasting.  “Here in Massillon we are sports strong, whether it’s football or basketball or any of the internal stuff that we do from choir or band or drama club standpoint,” said Mr. Ferrell.  “The town is sports-rich, so WHS-TV is sports-rich.”

Students that elect to pursue a career in broadcast are highly encouraged to take additional coursework after leaving the program.  But Mr. Scheetz emphasized that students need the drive and passion to succeed in this business.  “We’re constantly teaching them about life skills that have nothing to do with the nuts and bolts of video production, but have everything to do with life; separating yourself from the other individuals that want to do the same things that you do.”  About 50-75% of the students go on to make a career in the field, but in different ways.

Steve Willing was one of those students.  A 1979 graduate of the Telecommunications Program (as it was called then), Steve has made a career of handling the video camera.  “I took advantage of every opportunity available to me during the following three years,” he said. “I learned everything from running studio and portable television cameras, as well as editing, floor directing and running audio for a variety of projects.  In addition to working behind the camera, I gained experience in front of the camera. I hosted the Mike Currence Show, as well as other talk and sports shows during my senior year. I spent every Friday night at Tiger Stadium rotating through a variety of positions including Announcer, Cameraman and Director.  I also won a $200 scholarship from Massillon Cable TV for “Best Director” in 1979.”

Steve looks back on his education at WHS-TV with immense pride.  “I used those skills in conjunction with a four-year degree in Mass Media Communications at the University of Akron to pursue my dreams in the television industry,” he said.  “From public television to sports production to commercial production and news, my travels have taken me to many interesting places, both near and far. I hold Massillon close to my heart and I am forever grateful for the solid foundation the telecommunications program provided me at Washington High School.”  Steve currently works for KDKA-Pittsburgh as a Television News Photojournalist.

Regarding the contest to develop the website header, the students readily took to this challenge.   “Overall it was different enough and it was real,” said Mr. Scheetz.  “Matt and I are constantly coming up with projects and looking for things that are real situations.  That project is a real organization, it’s a real website.  It’s a real opportunity.  Here’s a situation where’s there is a need, here are your guidelines; you’re limited with your guidelines, but you can be as creative as you want.  And we loved it.  The kids enjoyed it.”

During the judging, the entries were eventually whittled down to the contributions of three students: Brandon Bennett, Nicole Maxhimer and Nate Soley.  One designed the orange/striping background, one designed the sports font for the URL address and one designed the cropped version of the Obie.  It’s clean and it’s modern.

The MTFBC thanks Dave and Matt for their time in helping to share WHS’s Media Arts & Production program with our readers and Steve Willing for also providing input.  A special thank you to all of the students that participated in the website header contest.  The MTFBC wishes you good luck with your future endeavors. 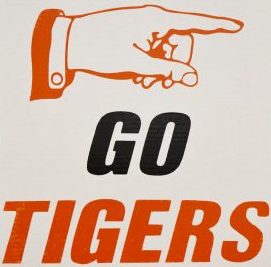 Tiger Signs Are Ready for…