Noteworthy Items: (1) In a 1940 spring scrimmage, Massillon defeated Kent State University, 47-0; the University of Akron had previously been scheduled as the scrimmage opponent, but they later backed out, making way for Kent State. (2) Cleveland Cathedral Latin suffered its only loss of the year to the Tigers, 64-0. (3) Weirton was awarded the West Virginia State Championship, but was being soundly beaten by Massillon, 48-0. (4) Erie East, PA suffered its worst loss in 20 years, to the Tigers 74-0.  (5) The contest against Alliance was the first high school game ever played at the Akron Rubber Bowl. (6) Toledo Waite had hopes for claiming the state title at the conclusion of the season, but Massillon effectively settled the matter, defeating them handily, 28-0,  It broke Waite’s 19-game winning streak. (7) This was the second highest scoring team per game in Massillon history (48 ppg). Defensively, the Tigers surrendered a lone touchdown, to Canton McKinley. So dominant were the Tigers that the entire starting lineup was awarded First-Team All-Ohio. (8) It was noted that Brown’s teams never lost a game when they were attired in black football pants. (9) Coach Paul Brown left Massillon after nine years to become head coach at Ohio State, winning the national championship in his second year, 1942; he would later coach the Cleveland Browns (capturing four AAC championships) and the Cincinnati Bengals.  (10) Assistant Coach Bud Houghton took the reigns over in 1941, left for the war after just one year, then returned to the post in 1946 after the war had ended; he would later become head coach for the University of Akron.  Junior High Coach Elwood Kammer (1942-44) and Augie Morningstar (1945) would become head coaches in Houghton’s interim. (11) Assistant Coach Carroll Widdoes followed Brown to OSU and eventually become their head coach in 1944, claiming the national runner-up spot in his first year.  (12) Assistant Coach Fritz Heisler became an assistant coach for both OSU and the Cleveland Browns.  (13) Junior High Coach Mel Knowlton would become a long-time head coach at Alliance. (14) Junior High Coach Howard Brinker went on to become an assistant coach in the NFL for the Cleveland Browns and Cincinnati Bengals.

The Alliance game was played at the Akron Rubber Bowl. 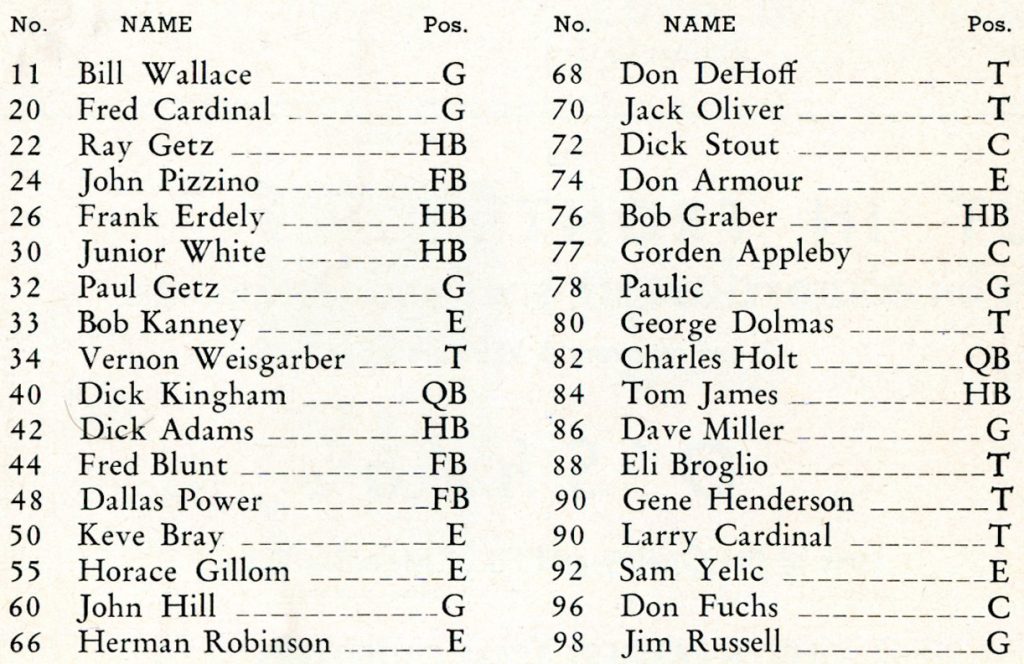