It was during spring football that Paul Brown knew his final team at Massillon was going to be a good one.  But just how good he must have wondered?  After demolishing all high school-comers by lopsided scores throughout the previous few years, he needed a better challenge.  So an inquiry went to the University of Akron, which initially accepted the offer, but then graciously declined.  However, Kent State University was more than willing and the scrimmage was set for April of 1940.

A short game story was written about the scrimmage in an April 16 edition of The Kent Stater with the title, “Flashes are Perfect Hosts, Lose 47-0; Gillom Stars; Only Seven Lettermen Saw Action.”  Unfortunately, the text of that story is unreadable without a subscription and I have better use for the money.  However, I recently came across a readable editorial in The Kent Stater that discussed the encounter and suggested that the game should never have been played in the first place.  That piece is presented below.

Incidentally, Brown’s 1940 team went 10-0 that year, outscoring the opposition 477-6, as he captured his 6th state championship and 4th national championship.  Brown always thought this team was better than his 1941 Ohio State Buckeyes.  Meanwhile, Kent State finished the season with an 8-1 record and took home the trophy in the Ohio Athletic Conference with a 4-0 mark.

EDITOR’S NOTE: The opinions expressed in this column are those of the columnist and do not necessarily represent the editorial policy of the Kent Stater. The Kent Stater accepts no responsibility for them.

There were two glaring faults to be found Monday when the Kent State UNIVERSITY footballers played the Massillon HIGH SCHOOL Tigers: In the first place, the game should never have been scheduled and, in the second, Kent should have won. There have been a good many loopy tricks pulled on this campus and that football game was by no means the dumbest—although it will be hard to top for a lovely exhibition of sheer stupidity. 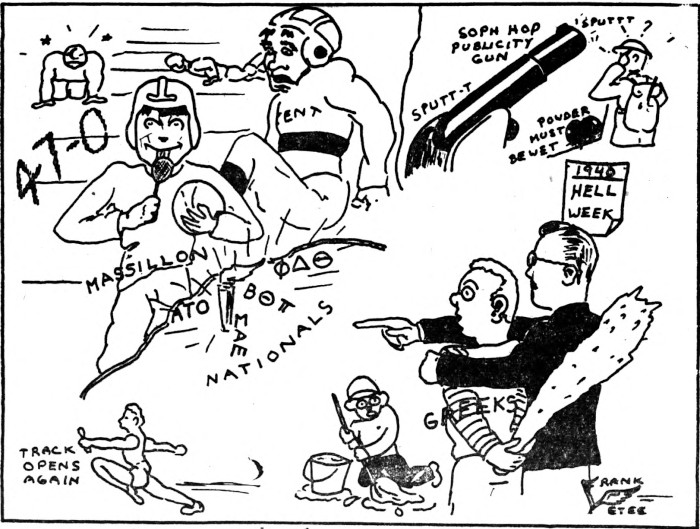 The hardest thing about it to understand is why the game was played. Kent had everything to lose —which it lost no time in losing—and absolutely nothing to gain, regardless of how you figure it. Not only did our boys lose, but they lost convincingly. The score of 47-0 doesn’t permit any of us to climb flagpoles and tonsil defiant bellows of, “Fluke! Fluke!” There was no fluke.  High school football players simply and sweetly and very easily hopped on a bus, chugged-chugged up here and beat the living britches off a university eleven.

No doubt this game did us much good and proved something or other to great advantage. It has at least given us prestige which we never had before—and which we had no desire of getting. A soft-pedaling sports write-up in this paper on Tuesday tried to snake Kent out of it without too much embarrassment, but it didn’t help much. The article stated that the outlook wasn’t too gloomy, due to the fact that only seven Kent lettermen were in the game. Well, so what? Any string of university substitutes should beat any high school team any place, any time. It just isn’t in the book that university teams lose to those from high schools.

If the result of such a game looks the least bit doubtful, the university should have enough plain horse sense to stay out. And, even if the college team is sure to win, there is no reason on earth why such a game should be played anyway. There could be no possible glory in winning. The layman would just wrinkle his nose and observe that university boys are expected to win.

That Massillon-Kent game was a prize example of foolishness and Kent has emerged with a blot on its reputation that it will be years in erasing—if it ever does. And, when you get right down to points, it is not the team’s fault in any respect. The members played their best and tried plenty hard. Massillon is just too fine a team. When team is compared to team, the result was not surprising nor shaming.

The high school university angle is what matters. Massillon is the best high school team in the state — the nation — or even the world. The Golden Flashes we know do not rate very highly. Why should our reputation have been risked when there was no point in it? That is the part that makes us so damned mad.

Now that it is all over most of us certainly hope with all the hope we have in us that everybody is satisfied. Coach Starn has made an unforgiveable blunder. He has humiliated his team and this university, and he has made Kent the laughing stock of football circles. I assume that Coach Starn is responsible for the Massillon game. He could, at any rate, have stopped such a move even if he didn’t start it. Other small universities have been challenged by Massillon. Akron University made arrangements for a game, then got smart and called the whole thing off. But, that’s all right—here’s dear ol’ Kent willing to be a goat. All this talk won’t do any good, of course. What’s done, very sadly, is done. All we can try to do now is to live it down —and it will really take a heap o’ livin’.

I also found a second short editorial on the same subject.

REVIEWS AND PREVIEWS OF CAMPUS NEWS, By JOHN MINE

SEEMS ‘that the story that caused the biggest “whispering campaign” on the campus this week was the gridiron run around handed down to the Flash football team Monday, by Massillon univer . . . er . . . pardon us, it’s a high school, isn’t it. It’s a taboo subject, Flash football, that is, so perhaps we had better drop the discussion. But Rosy’s trying hard . . . he’s even extended practice another two weeks. So let ’em come, Brimfield, Roosevelt, any of them, we can take them over.