Massillon residents are quite aware that athletics are a big deal at Washington High School, particularly when it comes to football, which owns 24 state and 9 national championships and is considered as an annual contender to win another.  The tradition of the sport is lengthy, encompassing a time span of over 120 years, and many Tiger fans are eager to protect and maintain it.  So what better place to demonstrate that to the public but in the athletic wing of the high school.  There fans will have an opportunity to witness the ever growing displays that honor the great players and coaches of Massillon’s past.

The recent additions to the sports hall are just the start of what is envisioned to become a massive exhibit.  It all started during the initial construction of the high school with traditional trophy cases.  Next came the Wall of Champions with the large painted portraits of their inductees, later to be replaced by commemorative plaques.  Then the Massillon Football Hall of Fame was born, with additional plaques for those honorees.  Now, during the past few months, there have been two new additions.  The first was display cases for a large collection of footballs that were actually used during some of Massillon’s big wins.  And just recently, there hangs a massive Tiger flag that has a unique history of its own.

The Massillon Football Museum has been home to around fifty special footballs from past games, many dating back to the 1940s and 1950s.  But until this year very few fans have had the opportunity to view them.  Now, with the addition of several display cases, many of the balls can be viewed.  And more balls will be included as display cases are added.  The display cases have been installed in the hallway that connects the high school to the indoor facility.

In 1938, during Paul Brown’s coaching tenure in Massillon, an avid fan constructed a 15’ x 8.5’ applique flag to celebrate Brown’s achievements.  On the flag was stitched a running tiger and the years in which Brown won state championships, later adding the same award earned under Coach Bud Houghton.  The last time the flag was seen was in 1942 when it flew from a flag pole during the Massillon-McKinley game, the day the Bulldogs snapped Massillon’s 52-game win streak.  It was alleged that two former Canton players snatched the flag after the game and hid it in an attic in Canton.  Later, Dr. David Leffler, a student at the time, informed police that after the flag was removed from the flag pole, it was ripped from his arms by a “Canton fan.”  When the thievery went public, the deviant panicked and moved the flag to Youngstown, where it was eventually hung on the wall of a local lawyer.  It took a long time to locate the flag, but in 1987 its whereabouts were finally discovered and the flag then promptly returned without penalty.  Until recently it in hung in the basement of the old Massillon Post Office, which serves as the home of the Football Museum.

Through a tremendous effort of many volunteers and commercial organizations, the flag has been preserved and is now on display to the public for the first time in 79 years.  Framed and behind a protective plexiglass cover, the flag can be viewed in the hallway that connects the high school to the indoor facility.  Below is a list of the project participants:

All of this could not have been done without the backing of Mr. Dave Weaver, who has been instrumental through his vision and support throughout the construction of the sports hall.  The installation of the football cases and flag are a continuation of his plan over the next few years to fill the hallway with sports displays.  In fact he plans to expand next into the hall adjacent to the weight room.  It is within this latter area that the Wall of Champion photos will be rehung.  He also envisions a section honoring all Tiger football players that suited up professionally.

More good things to come.  Be sure to stop by the next time you are in the high school. 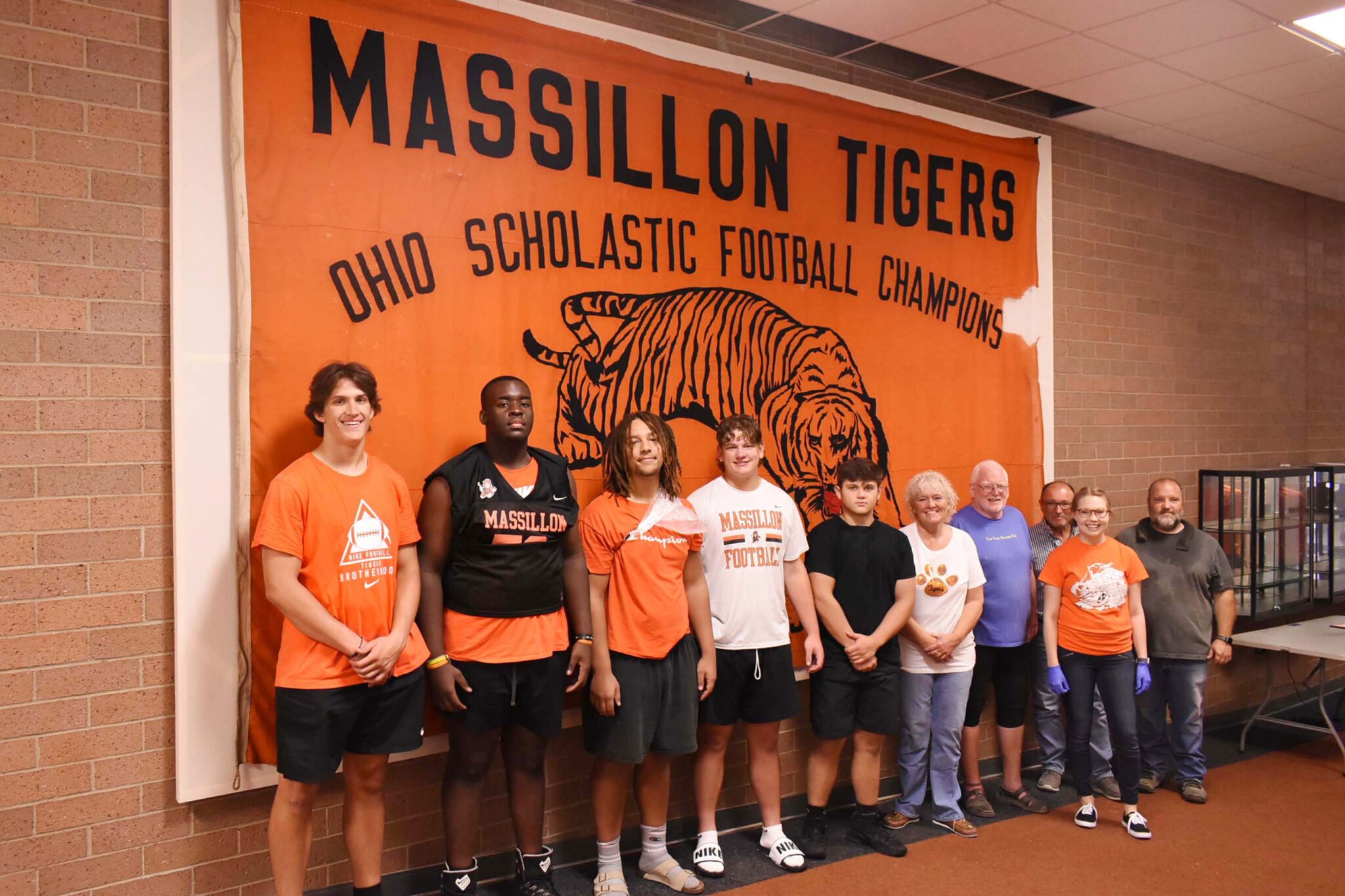 The crew in front of the finished product (Gift of Massillon Tiger Football Booster Club (2014.39.212) Collection of the Massillon Museum) 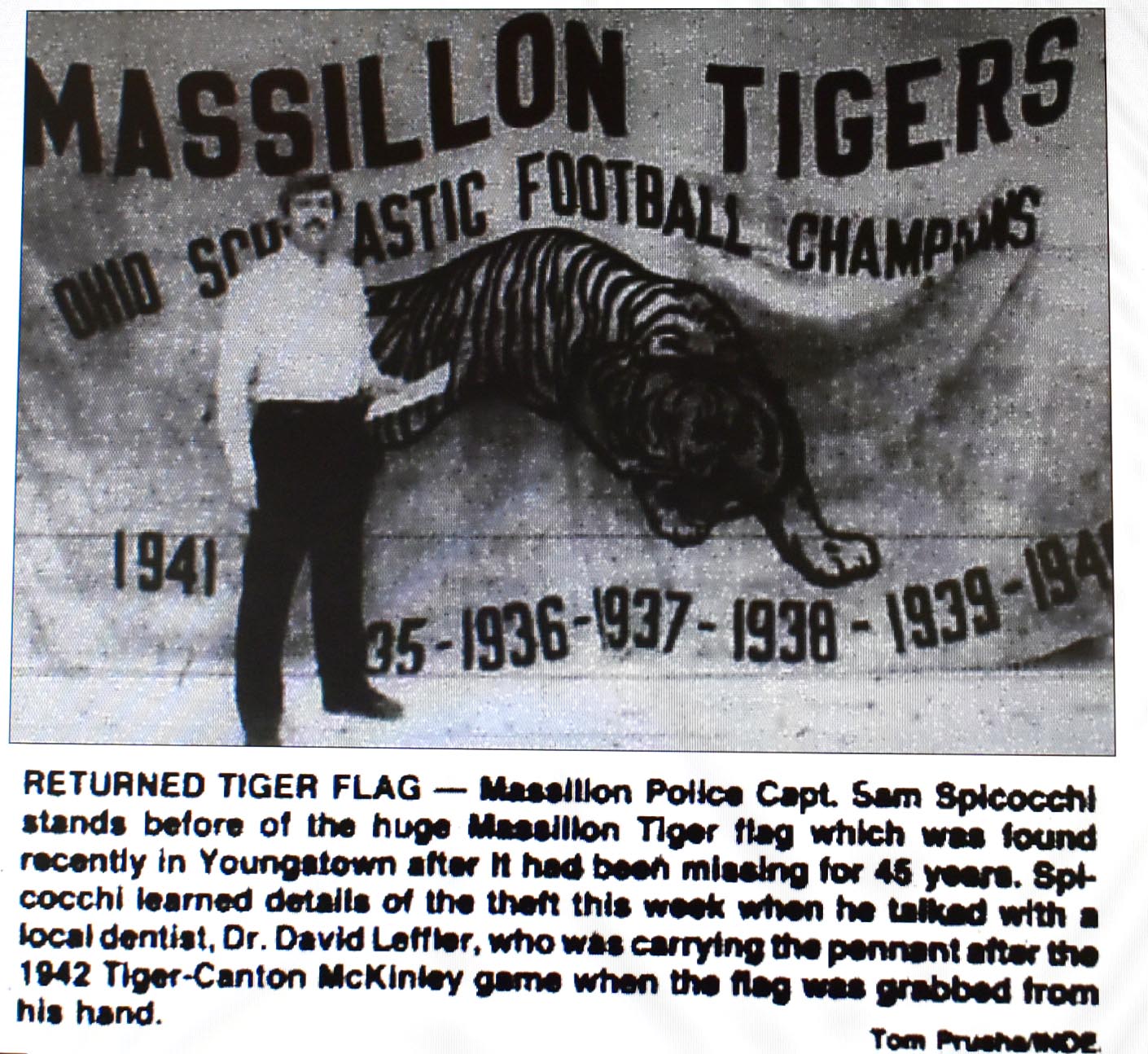 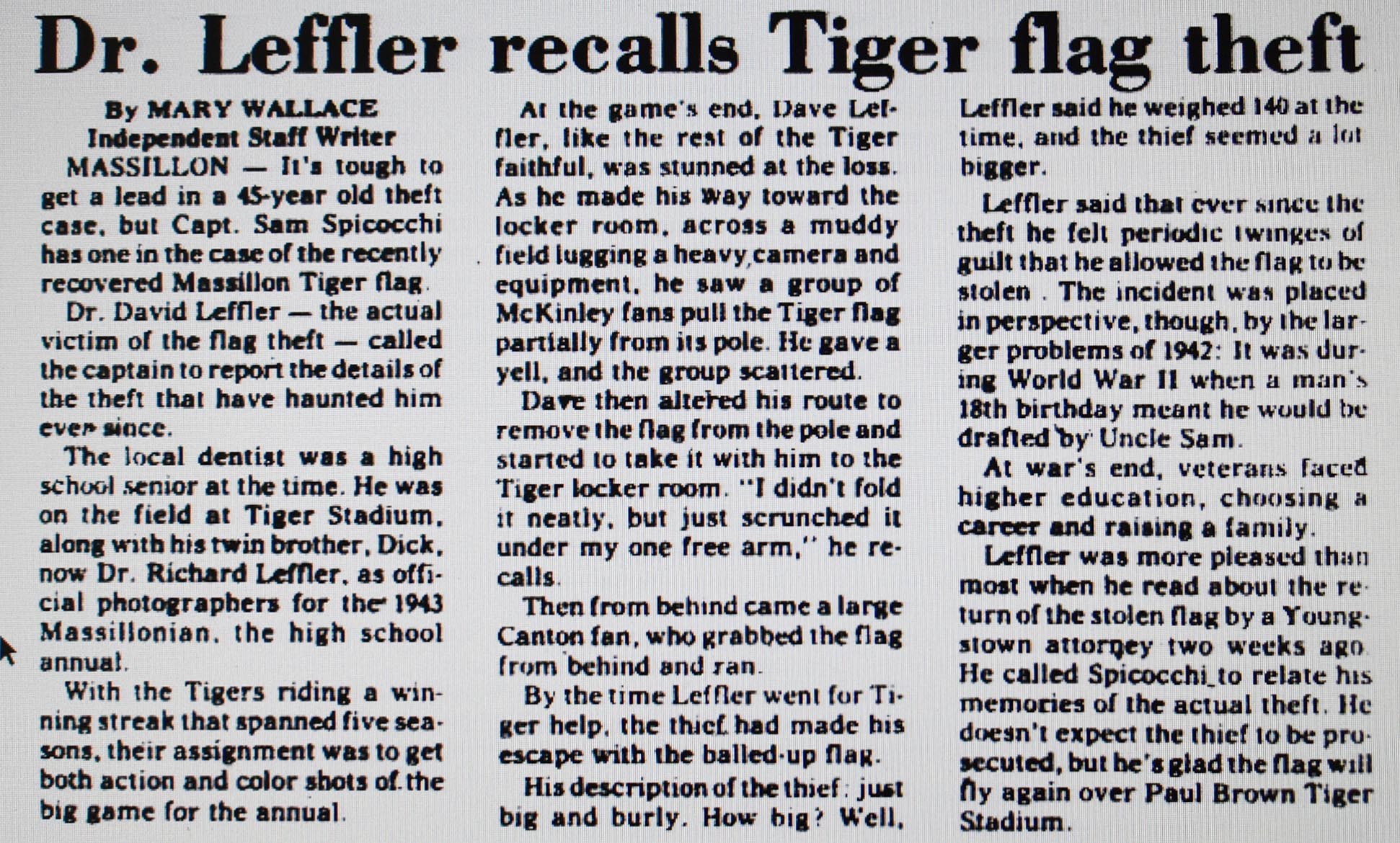