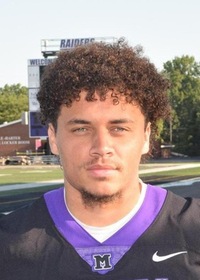 Former Massillon player and current Mount Union defensive back Kordell Ford was recently named Division 3 1st Team Collegiate All-American by the Associated Press.  The 5′-10″, 190 lb. Ford, who majors in Sports Business, had a productive junior year in helping his team to an 11-1 record and a birth in the post-season playoffs.  For the season, he recorded 53.0 tackle points, two quarterback sacks and a pass interception, including a season-best eight tackles against Heidelberg.  In addition to his All-American status, Ford was named to the All-Ohio Athletic Conference first team and recognized as the OAC’s top defensive back.  He has also been nominated for the Cliff Harris Award as the top small college defensive player in the country.  In his previous two years, Kordell was credited with 56 tackles, including 4.5 tackles for loss, a quarterback sack and a fumble recovery.

At Massillon, the 2017 graduate played varsity ball extensively for three season, first under Jason Hall and then Nate Moore, lining up at both running back and defensive back.  As a senior, he was a team co-captain and named to both the All-County and All-District teams.  His stats were as follows:

Kordell is the son of Charles and Jodi Ford.