Keyes keys yet another Massillon runaway at Fitch

AUSTINTOWN Attention has been paid through most of the first half of the season to the way Massillon’s offense can throw the football. A record-setting receiving performance on the opening night and a quarterback rewriting career marks virtually every time out can bring such notoriety.

On Friday night against Austintown Fitch, the Tigers showed they aren’t too bad running the football, either. Especially when Terrance Keyes gets his hands on the football. 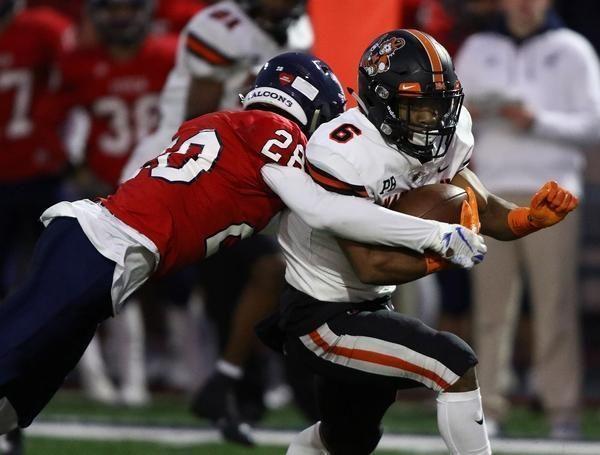 With Keyes running wild through the first half, Massillon ran roughshod over the Falcons in a 55-7 victory at Greenwood Chevrolet Falcon Stadium to improve to 6-0 on the season.

“We’ve got a great passing game,” Keyes said. “We just have weapons all over. I just feel like (quarterback) Aidan (Longwell), with him having all the success he’s having in the passing game, I feel like it opens it up a lot for me. The running game, it’s just there. I was rolling today.”

Keyes carried the ball 16 times in the first half for 185 yards, scoring four touchdowns. That included a stretch of 14 plays where the 5-foot-9, 190-pound senior carried it 12 times, the 12th of those a 15-yard run in which he leaped over a Fitch defender at the Falcon 4 on his way to his third score of the night.

Keyes’ fourth touchdown run of the night, a 5-yarder with 2:01 remaining in the first half, gave Massillon a 48-7 lead. It marked the third time the Tigers have hit the 40-point mark in the first half, and the fifth time they played with a running clock in the second half.

“They were staying two high (with the safeties),” said Massillon coach Nate Moore, whose team finished with 264 rushing yards and 423 total yards on the night. “They were giving us great run looks. Our offensive line played really, really well.”

Massillon, which ascended to No. 1 in the Division II state poll this week, will return home next Friday to meet Pennsylvania visitor Gateway. The Gators went into this week’s game against Franklin Regional (Pa.) with its only loss having come in their second game of the season against Penn-Trafford, the team the Tigers beat in Week 4.

Massillon’s starters will go into the Gateway game having spent another second half on the sidelines as its backups played from the start of the third quarter. Of course, it was the starters’ performance which gave them the opportunity to get some more rest.

“I was real pleased with the effort,” Moore said.

It wasn’t just the running game which did it for the Tigers, either. They made plays in seemingly all three phases.

Caiden Woullard’s punt block started Massillon’s first possession at the Fitch 42. The very next play, Aidan Longwell hit Jayden Ballard for a touchdown to make it 7-0 with 9:10 remaining in the first quarter.

Longwell, who was 5-of-7 for 99 yards in the game, also connected on a 10-yard touchdown pass to Andrew Wilson-Lamp to make it 34-7 Tiger with 6:52 left in the second quarter. The senior now has 6,155 yards and 68 passing touchdowns in his career, extending both marks.

That was one of two blocked punts the Tigers came up with in the first half. Austin Brawley blocked one which Isaiah Clark picked up inside the Fitch 5 and ran it into the end zone for a touchdown to make it 41-7 with 4:45 remaining in the half.

Fitch’s lone score, a 2-yard Devin Sherwood run to make it 14-7 late in the first quarter, was was partially set up by one of the few first-half miscues by Massillon. The Tigers were called for a personal foul after making a tackle out of bounds after a third-down stop around the Massillon 40 to keep the drive alive.

The Falcons would finish with 167 yards of offense. Of those yards, 123 came on the ground.