Spring Kickoff Hype Video created by Tony Martin (BigKat Films – TigerPaw Pictures)
The Spring Kickoff was held on May 3rd at the K of C in Massillon. Guest Speaker Nick Saban, Head Coach of University of Alabama. Coach Saban provided a spendid speech and was very complimentary of Massillon and Stark County.

I don’t do this, I don’t speak at high school banquets. The only reason why I’m here is because this is Massillon. ~ Nick Saban – Head Coach University of Alabama

Nate Moore addressed the crowd by setting the schedule for the 2017 and introducing the coaching staff including new coaches Craig McConnell (Defensive Coordinator), Spencer Leno (LB), Jarrett Troxler (Quarterbacks). Each Coach spoke briefly of their responsibilities and their player groups. All are excited for the upcoming 2017 season.

MassillonTigers.com – Updated 2017
FUNDRAISER: A Night At the Races 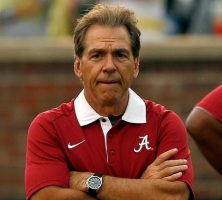