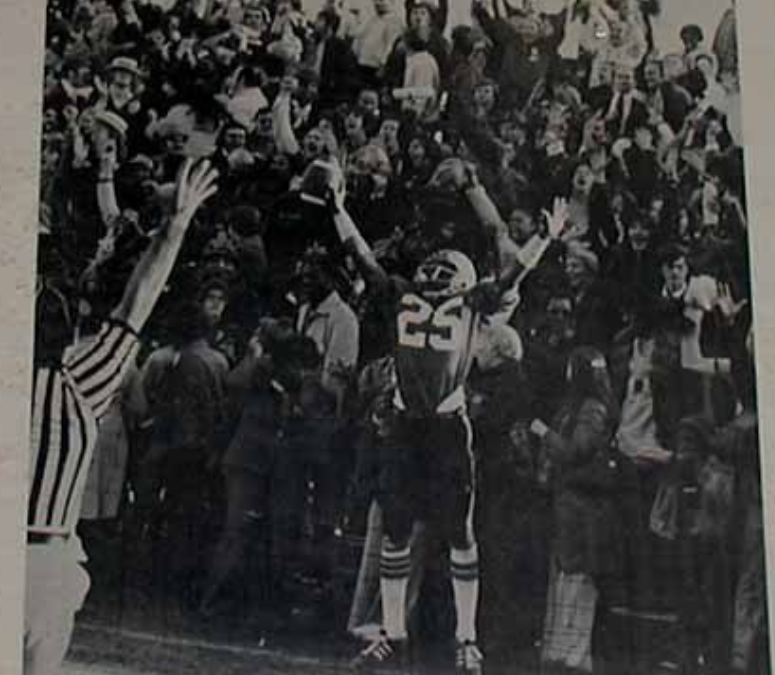 This is the second part of a 7 part series that relives some of the greatest Massillon Tiger victories in the Massillon vs. Canton McKinley rivalry. These games were chosen by the writers as critical games throughout Massillon’s football history.

McKinley came into the game ranked #1 in the State while the Tigers had 4 losses in Chuck Shuff’s first year. An unexpected ending occurred and became one of the greatest finishes in the Massillon vs. McKinley rivalry.

MASSILLON – At a few moments past the hour of four o’clock Saturday afternoon, an inflated brown leather ellipsoid floated downward from the sky.

It nestled in the arms of a young man by the name of Edward Bell, an 18-year old who is enrolled at Washington High School here and who just happened to be jogging about in an area of real estate known as Tiger Stadium.

His specific location was a plot known as “The End zone” – an appropriate name, for his simple act of catching the ball “ended” many things.

79th IN CLASSIC SERIES
It was the end of the scoring in this 79th scholastic football classic which has pitted the young warriors of Canton McKinley and Massillon Washington high schools since 1894 (flu scratched a game during World War I), put the 79th episode into the books reading Massillon 20, McKinley 15.

It ended the Canton McKinley undefeated record this season at nine, blasting hopes for the first 10-0 season since 1956.

COMEBACK FAILS
It ended the dramatic and brilliant McKinley comeback, which saw the Pups’ Roch Hontas kick a 25-yard field goal for a 15-14 lead only 73 seconds before the game clock was due to run out.

It also will mean the end, no doubt, of McKinley’s No. 1 ranking in the wire service polls. The Pups were attempting to win the mythical wire service title for the first time since 1955 and 1956, when they won back-to-back championships with 20 straight wins over two seasons.

TIGERS SMELL UPSET
Wood hit halfback Mark Streeter with a 24-yard scoring strike when the game was but nine-and-one-half minutes old, and the Tigertowners smelled an upset.

Massillon’s first score was no fluke, as the Tigers drove the ball 71 yards in 12 plays after stopping McKinley on fourth down and a foot.

The Bulldogs’ Mike Kolbs pounced on a Massillon fumble on the third play of the game, but McKinley couldn’t cash in.

Trailing 7-0 McKinley got on three yards on three plays after the kickoff and Hontas punted to the Tigers’ 36, from where Wood engineered his second scoring drive.

WHIPPING BOY NO MORE
Wood, who was one of the whipping boys for the boo-birds and boosters when Massillon lost three of its first four games this season, again whipped his team down the field and in a dozen plays had used up three minutes, 50 seconds of playing time, covered 63 yards and put another seven points on the board.

Wood himself did the honors, diving the final two yards over the right side.

Hontas got the Pups moving, finally, as he began hitting his aerials.

PUPS SCORE ON PASS
The Pups scored on a 36-yard pass from Hontas to end Ruben Floyd. But when Jonathan Moore, McKinley’s leading rusher and scorer, failed to make the three yards for the
two-point conversion, the Pups were a long eight points behind.

The drive was 77 yards in 13 plays, but was kept alive by a major Massillon mistake, a roughing-the-kicker penalty on a fourth-and-14 Hontas punt at the Bulldogs 19.

The Tigers tidal wave trundled down the turf to the McKinley 28 before ebbing. From there, Dave Dowd, who kicked the two PATs, missed a field goal try from the 35.

But the short chip shot hit like a nine iron on the five yard line and McKinley was 95 yards away from the equalizer and the fourth quarter was two plays old.

Hontas retreated into his own end zone and flipped a screen pass to wingback Bob Armstrong, who got out to the 13, and the McKinley march was on.

Massillon linebacker Dennis Bricker made what looked like a drive-stopping tackle on a screen to Floyd at the Bulldogs own 21, setting up a fourth-and-two situation.

BULLDOGS MARCH 95
But faint heart never won a football game and Moore got eight on a sweep and the march continued for 95 yards in 18 plays, capped by fullback Bob Lombardi’s three-foot blast to pay dirt with 3:37 left in the game.

Hontas’ pass to Lombardi was incomplete and the Tigers still prevailed by a pair, 14-12.

The ensuing on-side kickoff bounced into a mass of Massillon and Canton players and McKinley’s Eric Llewellyn came up with the football and the Pups were born again.

Hontas quickly completed a pair of passes to Tom Grafton and Ray Ellis and Lombardi got nine yards in three tries to set the state for what the Canton backers would love to have settled for.

With Bill Poulos holding, Hontas kicked a 25-yarder right through the middle of the uprights, putting three points on the McKinley side and joy in the hearts of Canton fans.

Then came the dirge, tolled by the “Bell”.

Wood threw the ball three times and Bell caught all three on down-and-out patterns for 12, 9 and 12-yard gains.

He missed one and then got sacked and the ball was at the McKinley 34 with 13 seconds remaining.

Bell lined up on the right side, blew downfield and started another cut to the outside, but then suddenly flew for the goal.

He was all alone past the goal line when Wood’s toss settled into his arms. The clock showed there were six seconds remaining.

It was Massillon’s 43rd win in the long series against 31 losses. There have been five ties.

It put Warren and McKinley in a tie for the All-American Conference title for the second year in a row. Last year, the two shared it with Massillon also.

The victory gave Massillon a 6-4 season record and today in Tigertown nobody even remembers those four losses that happened such a “long time ago sometime this season.”