Steam rollers are hard to stop once they get started. But football players of Cambridge high school, after their experience last Saturday, would tackle a steam roller with pleasure rather than attempt to halt the march of the orange and black football team of Washington high school toward the scholastic championship of Ohio. Ask the Cambridge warriors what they think of Coach Stewart’s gridiron eleven and they’ll tell you it’s an aggregation made up of eleven steam rollers.

So thoroughly did the orange and black bury Cambridge high Saturday that the Guernsey county athletes were just beginning to dig out from under and get their breath today. Fifty-eight points were rolled up by the youthful Tigers while Cambridge players only got a chance to look at Massillon’s goal line from beyond midfield.

And it was not until the second half that Coach Stewart’s lads opened up. But when they did open up it was curtains for Cambridge. The downstaters were pushed aside like chaff in the wind while the Massillon eleven, which promises to be the greatest scholastic team in the city’s history, plowed and smashed its way through the Gurnsey county team for 48 points. Massillon was held to 10 points during the first half and Cambridge rooters were beginning to congratulate their team on its ability to hold Massillon to a low score.

But when the second half opened it is reported that there were a great many casualties among the fans, fainting spells and attacks of heart failure being many. As for the Cambridge gridders, they took their mauling with good grace. There was nothing else to do. Their faculty manager had been unwise enough to schedule a game with the youthful Tigers and so it was up to the players to take their medicine. The game was played on nearly even terms during the first half. Massillon secured a touchdown and a field goal by “Midge” Thomas. But between halves Coach Stewart whispered to his gridders to open up during the last two quarters and show something. And they responded by rolling up 48 points during the last 25 minutes of play.

It was Massillon’s third victory of the 1922 campaign and after the game Cambridge took its place along side Dayton Steele and Barberton, other teams which have tackled the orange and black and felt the strength of the local eleven’s attack. While Cambridge today was still digging out from under the top heavy score Coach Stewart’s lads began to prime their attack for next Saturday’s game at Youngstown with Youngstown South, which promises to be one of the hardest on the local team’s schedule.

The local gridders came out of the Saturday evening contest none the worse for wear, with the exception of minor bruises and bumps, the result of their gridiron clash.

“Butch” Hill, sturdy fullback was an outstanding star of Massillon’s attack last Saturday. Five times did this sterling athlete rip his way through the Cambridge team for touchdowns. Cambridge might just as well have tried to stop a juggernaut as to stop Hill. It simply couldn’t be done. Teams on Massillon’s schedule are beginning to realize that his lad Hill is quite some football artist.

Hill though was ably assisted in his hero role by the balance of the orange and black gridders who were in the game up to their necks throughout. Thomas hung up two touchdowns. Jamison made one and so did Boerner. 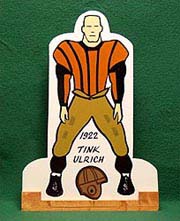