The orange and black flies high today, At the top of the mast it waves and flaps defiantly in the air. And why shouldn’t it?

Under these colors, the golden tornado of Washington high school swept Erie Academy into oblivion Saturday afternoon on Massillon field. Even the most optimistic of the loyal supporters who turned out, scratched their heads in surprise as the vicious orange wave moved up and down the field, smashing the Erie defense and sweeping every barrier aside to mass a total of 26 points while the battered Erie team could show no score.

It was a game comeback the local team made. Picked by many of the “wise guys” to win by three or four touchdowns, Erie Academy was swept completely off its feet and after the first touchdown; there was a little doubt as to which was the better team on the field.

So decisive was the attack of the Massillon gridders that they registered 16 first downs, a large number for any team to make. Only Erie’s plucky fight kept the score from being larger, for several times the locals were in striking distance of the Erie goal Truly, Massillon had the breaks, if an intercepted pass can be called a break, but it was the determined drive of the youthful Tigers that brought the coveted reward and set the football world a talking. And it is talking. The many “critics” who stayed away from the game because they “knew” the boys couldn’t play football and would be beaten by an overwhelming score, are beginning to question their criticism and withdraw all unfavorable remarks. Saturday evening, wherever there was a crowd of fellows, football was the subject and it’s beginning to look as through the old Massillon spirit will return and the bleachers will be packed when the orange and black makes its next appearance, October 23.
CROWD SMALL
Any team that plays football like those youthful Tigers played Saturday is deserving of a large crowd and loyal support and not the kind of a crowd that turned out Saturday afternoon to witness the first intersectional contest ever played in Massillon.

The crowd of more than 2,000 that did pass through the gates Saturday was a loyal crowd and all left satisfied that they had witnessed one of the best brands of football ever shown here.

It was the lightning like offense of the orange and black that turned back the favored Erie team. Laughlin and McConnell both showed wonderful ability at carrying the ball, while McConnell’s deadly accurate passes counted for many of the local’s long gains. It was a surprised little band of Erie rooters that watched its team being swept back toward its goal in the first quarter by a powerful Massillon offense, and it was an equally surprised and astonished Massillon crowd that saw the local team cross the Erie goal line, scoring the first points of the game.

To Price, husky guard, must go a lot of credit for the defense of the Massillon team. The center of the line was impregnable and at the bottom of most every pileup after an Erie gridder had driven into the line, could be found Price. He played the same hard game from start to finish, being taken out in the first half for a needed rest. “Fritz” Gump came back into his own and starred both offensively and defensively. Gump gave great interference on end runs and in the same manner broke up the interference on Erie dashes around his wing.

Though Massillon showed many stars, Erie had a player who was fast and classy and who several times during the fracas, pulled off exciting dashes that caused the Massillon fans to cease breathing until he was safely stretched out on the ground. This was Fuller, one of the few veterans from the Academy team of a year ago. The entire Erie attack was built around him, and he bore up well under his task.
SCORE EARLY
The orange and black scored in the first eight minutes of play. Erie was driving towards the Massillon goal line when McConnell intercepted a pass on the Erie 35-yard line. He carried the pigskin 10 yards before being tackled, placing the ball on the 25-yard line. Smith then hit off tackle for seven yards and Laughlin cut off two more, but Massillon was declared offside and was penalized five yards. McConnell failed to gain on a line plunge but on the next play he passed the oval 10 yards to Gump who raced the remaining 15 yards for a touchdown. Gump came near being tackled after catching the pass, falling to his knees, but he quickly pulled himself loose and continued over the goal line. McConnell’s toe failed to respond and the extra point was lost.

Shortly afterwards, Erie punted to the Massillon 47-yard line. On the first play, McConnell stepped back and hurled a pass to Laughlin who carried the ball to Erie’s 18-yard line before being downed. Foster then made a yard and McConnell narrowed the distance to the goal by six yards on a sweeping end run. He then struck through the line for three yards, making a first down on the eight-yard line. On the next play, Laughlin tore through for four yards, placing the pigskin on the four-yard line as the whistle blew announcing the end of the first quarter. On the first play in the second period, McConnell ripped around left end and over the goal line. His toe obeyed and added another point. The half ended with the score 13 to 0 in favor of Massillon.
PASS BRINGS SCORE
It was late in the third quarter before the local team could put across its third set of points. Again it was the forward pass that brought results. McConnell placed the local team in a position to score by intercepting an Erie pass in midfield and scampering back to the 28-yard line before being downed. On the next play he ripped off five yards, but Massillon was penalized five yards for being offside. A pass was batted down and on the next play McConnell hurled a short pas to Laughlin who ran 25 yards for a touchdown. McConnell kicked goal.

The last points were gathered late in the game and were accumulated as a result of the brilliant running of Bast, a substitute, who was playing his first game.

Bast returned an Erie punt 35 yards to the eight-yard line by a brilliant piece of open field running. Hax hit the line for a yard and on the next play Bast waded over the goal line. Hax failed to make the extra point.

Coach Atkinson’s men used the forward pass effectively Saturday. The aerial game was the big noise in the offense for it gained a total of 169 yards, 10 passes being completed, five incomplete and one intercepted by Erie. Erie was not so fortunate in its attempt to harness the air. The Erie gridders hurled 11 passes, completed three for a total of 35 yards, had four intercepted while four were batted down by Massillon players.

In the number of first downs the orange and black excelled, making the required yardage 16 times to 10 times for Erie.

McConnell made a beautiful catch when he intercepted Fuller’s pass in the third period to put the Massillonians in a position to score. “Mac” caught the ball over his shoulder while racing towards the Massillon goal. He pivoted quickly however and was about face shaking off tacklers as he headed toward the Erie goal, finally being thrown out of bounds on the 28-yard line.

The local team showed a wonderful defense against the forward pass, intercepting four Erie passes at critical moments, and batting down a like number.

Penalties were numerous during the game, both sides being setback often for breaking rules. However, both teams fought hard and clean and none of the penalties were inflicted for intentional rough playing.
PLAYERS LOOK GOOD
Atkinson’s reserve material showed up well Saturday. It was the Massillon mentor’s first chance to see his reserves under fire and all played capable. Bast grabbed much of the lime light with his brilliant open field running, while Hosso showed up well. 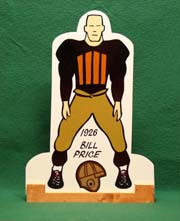