AKRON Style points can be for some sports. When it comes to ending a high-school football dynasty, though, the only points that matter come on the scoreboard.

The only points that mattered on Friday night in the Division II Region 5 championship game inside The University of Akron’s InfoCision Stadium: Massillon 17, Hoban 14.

“We just wanted to score more points than they did,” Massillon coach Nate Moore said. “That’s all.”

Like that, the Tigers not only won a program-best third consecutive regional title, but also ended the Knights’ run as four-time state champions.

For Massillon, it’s off to its second consecutive 13-0 start. The Tigers will play Avon, also 13-0, in a state semifinal next Friday night. The likely site will be Brunswick, although that will be made official on Sunday by the Ohio High School Athletic Association.

Hoban, which finishes 11-2, was denied a chance to join St. Ignatius as the only school to win five consecutive state playoff titles. The Wildcats had done that from 1991-95.

The Knights never led in the game, although they were able to tie it twice at 7-7 and 14-14. Alex Bauer’s 31-yard field goal for Massillon with seven seconds left in the first half provided the difference in the game, a play set up by one of two Hoban fumbles.

“Everything has to end,” Knights coach Tim Tyrrell said. “You don’t want it to end, but it has to end. Next year’s our time to restart our tradition and keep moving forward.”

Massillon made sure Hoban wouldn’t be able to keep moving forward because of a defensive effort, especially in crunch time. No time was bigger than with just over two minutes remaining and the Tigers holding on to their three-point lead.

Hoban faced a fourth-and-11 from the Massillon 19. A week earlier against Mayfield, the Knights had taken the lead for good when Shane Hamm hit Kharion Davis for a 13-yard touchdown on a fourth-and-6 play with just under 90 second remaining to erase the exact same deficit

Ben Krichbaum, though, made sure history wouldn’t repeat itself. The Massillon senior linebacker swarmed Hamm for a three-yard loss to give the Tigers the ball back with 2:05 left.

“Our kids held, man,” Moore said. “They held. Backs against the wall.”

Massillon would make sure that would be the final time Hoban touched the ball. Facing third-and-2 from its own 30, Zion Phifer would be given the ball and would fight his way forward to get the necessary yards to move the chains.

It was Massillon’s only first down of the second half. It was enough, though, to set off the celebration as the Tigers got into victory formation.

“A huge first down at the end,” Moore said. “That was huge. I’m just proud of them.”

Massillon’s ground game proved to be huge throughout the game. Terrance Keyes and Phifer combined to rush for 147 yards on 38 carries.

Keyes finished with a game-high 87 yards on 17 carries. The senior running back played despite a 30-hour period leading into the game of question surrounding his involvement in an August incident in Akron, one which came to the surface on Thursday.

“Everybody came out and played hard,” Moore said. “I’m really proud of all of them.”

As a team, the Tigers finished with 138 net rushing yards. They would have 80 passing yards on the night, 53 of those on Aidan Longwell’s touchdown pass to Andrew Wilson-Lamp to give Massillon a 7-0 lead with 6:30 remaining in the first quarter.

Longwell would also throw a nine-yard shovel pass to Phifer to give Massillon a 14-7 lead with 1:02 remaining in the first quarter. The senior quarterback was 4-of-12 with two interceptions.

Hamm would hit Brayden Fox for a 40-yard scoring pass to tie the game at 7-7 with 4:39 left in the third. Victor Dawson would add a four-yard touchdown run to tie it at 14-14 with 6:30 remaining in the second quarter.

Twice as nice: Massillon opens with another rout of Warren

There was the concern about a potential letdown coming off of the previous week’s emotional win over archrival McKinley. There was also a worry about potentially coming out lacking in focus due to the 42-point Week 3 regular-season win the Tigers had registered back over their first-round opponent, Warren Harding.

Those concerns proved to be unfounded. Very unfounded.

Massillon would use big plays and stifling defense to roll to a 55-0 victory over the visiting Raiders in Friday night’s regional quarterfinal at Paul Brown Tiger Stadium.

“Obviously, you have to come out playing hard against a team like Warren,” said Massillon senior defensive lineman Manny McElroy, who forced a fumble which was returned by Caiden Woullard for a third-quarter touchdown. “They’re a great team. They’ve got great players and they’re able to make big plays. When we all do our jobs, we can make big plays. Everybody did their one-11th.”

The Tigers improved to 11-0 on the season. They will advantage to next Friday’s regional semifinal against Perry, a 37-27 winner over Hudson Friday at a site to be announced Sunday afternoon by the Ohio High School Athletic Association.

It will be the first time the two schools, located less than three miles apart, have played since the 2015 season opener, Nate Moore’s first game as head coach at Massillon. It will be the fourth playoff meeting between the two, the first since a 41-20 Tiger win at Perry in the 2006 first round.

After leading 27-0 at halftime, Massillon would use a 28-0 third-quarter advantage to take a 55-0 lead into the fourth quarter. The Tigers would force fumbles on three consecutive Raider possession to help create that bulge, including a 20-yard fumble return for a touchdown by Woullard.

For the game, Massillon would force five turnovers, while limiting the Raiders to just 107 total yards, including three net rushing yards. That included one on Warren’s first possession, which helped kick-start the Tiger rout.

“It definitely boosts our confidence more,” Woullard said of the turnovers. “It definitely gets us more confident. We just want to get back at it.”

On the fourth play of the game, Massillon’s Isaiah Roberson deflected a Raider pass and teammate Luke Murphy came up with the interception, which he brought back to the Tiger 46. Seven plays later, Terrance Keyes Jr. ran 11 yards for a touchdown to give Massillon a 6-0 lead – the point-after try failed after a misplayed snap – with 8:13 left in the first quarter.

Keyes would make it 13-0 with 1:17 remaining in the first quarter when he took off on a 75-yard jaunt on the first play of the Tigers’ fourth possessions. His third touchdown run of the night, a 3-yard jaunt, would make it a 34-0 Massillon lead with 8:27 left in the third.

Keyes would rush for 154 of his 188 yards on just eight first-half carries. Zion Phifer and Raekwon Venson would each add a second-half rushing touchdown.

“We like picking up yards,” Moore said. “We like scoring points. How that happens doesn’t really matter.”

Aidan Longwell would tie the Massillon career completions record when he hit Jayden Ballard for a 58-yard touchdown 17 seconds into the second quarter to make it 20-0. Longwell, who would go 5-of-11 for 110 yards with a score in the game, broke the mark on a screen pass on the next possession.

MASSILLON It must be something about season openers that brings out the best in Massillon receivers. 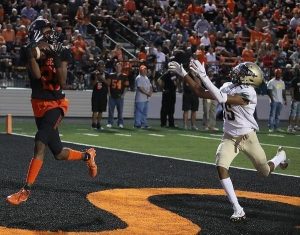 Junior Andrew Wilson-Lamp set a single-game school record with 232 receiving yards on 11 catches, helping the Tigers to a season-opening 44-14 win over St. Vincent-St. Mary on Friday night at Paul Brown Tiger Stadium. It breaks the old record of 222 yards, set by Austin Jasinski in the 2016 opener at Mentor.

“I just came out ready to play,” Wilson-Lamp said after his record-setting performance. “I wasn’t expecting to break anything.”

It didn’t take long for Wilson-Lamp to get into the groove, as he hauled in a 51-yard catch on Massillon’s third play to set up its first touchdown, 13-yard Terrence Keyes touchdown with 7:15 remaining in the first quarter. By halftime, he would have six catches for 163 yards and a score, a 45-yard catch to give the Tigers a 21-0 lead.

In between that catch and his record-setting 17-yard catch-and-run late in the third quarter, his final catch of the game, however, Massillon would go from on its way to a rout to a close game back to a rout. The Irish would score two touchdown in the final 56 seconds of the first half to cut it to a 21-14 halftime deficit.

“The first post I caught, I was like, ‘This is going to be a good game,'” Wilson-Lamp said.

The Tigers, though, would come out of the locker room by scoring 16 points in the first 4:45 of the third quarter to open up a 37-14 lead. They would get a opening-drive Preston Hodges touchdown run, as well as a safety on a bad punt snap by St. Vincent-St. Mary.

On the subsequent free kick, Jayden Ballard return it 66 yards for a touchdown with 7:15 remaining in the third. Ballard, who had 63 yards on five catches on the night, added a 33-yard touchdown catch on the first play of the fourth quarter.

“We just coached them up,” Massillon coach Nate Moore said of the halftime talk. “The coaches just got together, made the adjustments we needed to make, tried to take care of it. We just came out and played better.”

Or, essentially, play much like the Tigers did to start the game. 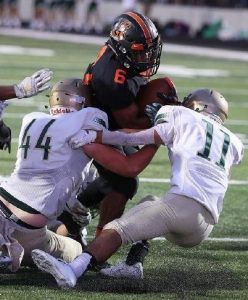 Massillon couldn’t have scripted a better opening 20 minutes. It had the football for four possessions and had found the end zone three times for a 21-0 lead with 4:18 remaining in the half.

Not only that, but the Tigers were doing just about what they wanted on offense, especially in the passing game. Aidan Longwell connected on 12 of his first 13 passes for 215 yards, including the 45-yard touchdown pass to Wilson-Lamp to give Massillon a three-score lead.

Included in Longwell’s start was a run of eight consecutive passes to open the second quarter, all but one of them to either Wilson-Lamp or Jayden Ballard. Longwel was 20-of-23 for 322 yards with two touchdowns and one interception.

Beyond the passing, Keyes was making the most of his Massillon debut. Playing against the team for which he played his first three seasons, Keyes had a the Tigers’ initial two touchdowns on runs of 13 and one yard.

Keyes would finish with 58 yards on 14 carries.

“I really like how we spread the ball around,” Moore said. “We take pride in getting the ball to all of our athletes.”

St. Vincent-St. Mary, however, would find life in the final 56 seconds of the first half. Enough life to turn what appeared to be heading to a halftime blowout into a one-score game.

The Irish cracked the scoreboard with a 10-yard Luke Lindsay-to-Josh Nickerson touchdown with 56 seconds left in the half to make it 21-7. Then, after Quinn Knox came up with an interception for St. V-St. M at the Irish 49, Lindsay hit Darrian Lewis for a 27-yard touchdown pass to make it 21-14 with 21 seconds left.

“We showed a lot of resiliency,” said Irish coach Bobby Nickol, whose team finished with 179 total yards. “We could have fell behind 28-0 at halftime and hung our heads. We made a few plays there at the end of the half.”