Homer Floyd was destined to become a difference maker capable of drawing harmony out of discord.  “In some respects I was a community project,” Floyd recalled. “My mother was ill a lot. I Iived on the Hill, I lived on Tremont Street, I lived with the Toles family in a foster home and I lived with Mrs. Dandridge. I had a lot of people touch my life in a variety of ways. I think all for the good.” (1). “Massillon helped me to get my start,” he said. “I was fortunate for the people involved in my life; they were all nice. Massillon was always nice to me and made certain I got the things I needed to be successful.”

Homer played running back and defensive back for the Tigers from 1952 to 1954.  His championship career started in 1950 when he was a player on the Jones Junior High Undefeated City Championship Team. In his three years playing for the Tigers Massillon was 29-1, beating McKinley all three years.   In 1952 and 1953 under Coach Chuck Mather the Tigers were 10-0 both years, capturing the Ohio State Championship and National Championship each year. In his senior year the team suffered their only defeat in Homer’s three years: a loss at Alliance, 19-7. “Homer Floyd looked like a thoroughbred,” said Coach Tom Harp. “He just bounced when he walked – it was like twinkle-toes or something. Nice looking, streamlined kid. Didn’t weigh much, 155 pounds. Could run like the wind, cut on a dime.” (1)

In his junior year Homer led his team with 78 rushing points and was second in total points with 84. He was named All-County and Honorable Mention All-Ohio. As a senior and Tiger Co-Captain in 1954 under Coach Harp, Homer had an incredible year. He set a school record with a 103-yard pass interception return for a touchdown against Barberton. He was No. 1 in rushing touchdown points with 84, and No. 1 in total points with 104. That year he rushed for 1372 yards with an 8.9 avg. per carry.  Verses McKinley that year, he rushed for 263 yards on 28 carries and scored two touchdowns.  The 263 yards was an all-time single game record and all-time single game vs. McKinley record that stood for 37 years until Travis McGuire rushed for 302 yards against McKinley in 1991.  Homer was Stark County Player of the Year and First Team All-Ohio running back in 1954. Currently Homer ranks fourth in Single Game Rushing All-Time and third in Single Game Rushing All-Time vs. McKinley, having just been passed in both categories by Jamir Thomas in 2018.

Homer joined former Massillon coach Chuck Mather at the University of Kansas in 1955 after receiving scholarship offers from an estimated 50 schools, including Woody Hayes from Ohio State. But life would be different in Lawrence Kansas. He faced personal rejections. “You and your wife cannot live here,” they said. “You cannot eat here.”  In the theaters African-Americans had to sit in the balcony. Only two of the three theaters in Lawrence had balconies. Homer would use these life experiences to make the world a better place.

Homer was the best football player at Kansas and at the same time Wilt Chamberlain was the best basketball player at Kansas.  From 1956-1958 Homer lettered all three years. He led his team in rushing those three years and led his team in tackles two out of three years. Homer was also Big 8 All-Conference at Kansas in 1958. In his final home game he scored two touchdowns against rival Nebraska for a 29 – 7 victory. It was the biggest margin of victory in the two team’s 66-game series.

During a 1957 game against TCU in Fort Worth Texas, the African -American players had to stay at a different hotel.  Homer shared that on one hand this was a very negative situation, but on the other hand it was a motivating factor in the sense that Chancellor Murphy got promises that it would never happen again. Homer said, “Our coach, Chuck Mather, was very much in the forefront of leading fights for African-Americans and Chancellor Franklin D. Murphy as well. Chancellor Murphy took it up himself to try to correct any issues that came up.”

WITH Permission of the University of Kansas Libraries

After Kansas Homer would play a year of Pro Football for the Canadian Football League Edmonton Eskimos in 1959 after being cut by the Cleveland Browns coach Paul Brown. “That (getting cut) could have been a blessing in disguise because I went on to have a successful career in other areas,” Floyd said. He realized that there was life after football.

Homer Floyd has been involved in civil rights for 50 years dealing with racial segregation, school integration, equal pay for women, and the resurgence of hate groups.  It was January 19, 1968 when Mr. Floyd, who was Executive Director of the Kansas Commission on Civil Rights, shared the stage with the Rev. Dr. Martin Luther King Jr. This would be Dr. King’s last speech to a college audience.  When Dr. King was assassinated on April 4, 1968; found in his coat pocket was note with the name Homer C. Floyd written on it.

On the Washington High School Distinguished Citizen Plague in Massillon, Ohio — it reads:

picture on the citizens award

Mr. Floyd retired January 2011 after 41 years as Director of the Pennsylvania Human Relations Commission. He was honored by The University of Kansas, his alma mater’s Black Alumni Chapter’s African-American Leaders and Innovators Project.

On Mr. Floyd’s 80th birthday he was honored as the “Dean of Civil Rights in Pennsylvania” by the Martin Luther King Leadership Development Institute.

In October of 2018 Mr. Floyd was asked “after your distinguished career what thought or idea would you like to leave with the community of Massillon?” 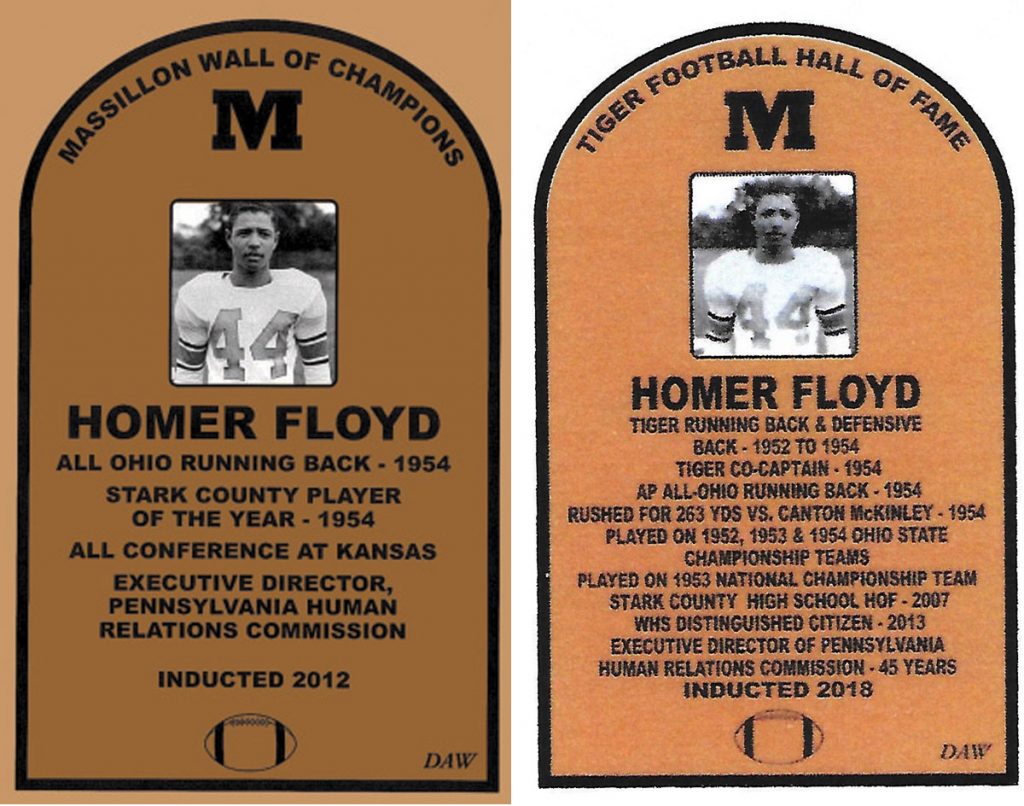 ** Massillon Players in the 1956 Team Photo with Coach Chuck Mather