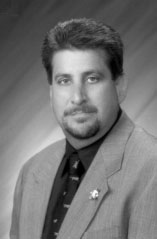 The Massillon Tiger Football Booster Club celebrated many “firsts” in 2000 under the leadership of George Mizer. Obie – as a trademark – was legally protected from unauthorized use. The Booster Club created a website by obtaining the rights to www.massillontigers.com from a private individual. The organization conducted its first house raffle, netting $83,000.00 for the Eagles 190 Sports Complex. The very successful fundraiser paid out $124,000.00 to 117 winners.

Because the state declared that Massillon City Schools were in “fiscal emergency,” the Booster Club established a budget with the coach to assure control of expenditures. The Booster Club took on new aspects of the athletic department funds.

The Tigers finished 8-3, including a last-second field goal by David Abdul that won the game against St. Edward’s. Among the records set during the season were David Abdul’s “most field goals” and his “longest field goal” at 56 yards in the Tigers’ game against Akron Garfield.

The satisfying 13-9 victory over Canton McKinley at Paul Brown Tiger Stadium ended the regular season. A poorly officiated playoff game, one that many associated with an OHSAA controversy, ended Massillon’s playoff season.

The McKinley win gave them entry into the state playoffs. The Tigers met Marion Harding in the playoff opener, but could not overcome 15 penalties and were defeated 17 – 13. The poorly officiated playoff game, one that many associated with an OHSAA controversy, ended Massillon’s playoff season.