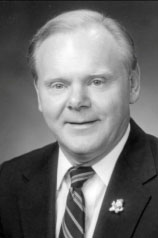 The 1987 season was one of peaks and valleys. Losing the first game to Akron Garfield 22-8 and then winning six in a row before losing the last three in heart breaking fashion to Cleveland St. Joseph 8-0, Middletown 12-7 and McKinley 18-13. The roller coaster ride ended with a disappointing 6-4-0 record but this Tiger team was never out of any game.

It was learned later that this would be Coach Maronto’s last Tiger team. Coach Maronto’s tenure here in Massillon record wise was not impressive, but as one Tiger parent stated, “Coach Maronto was a man of commitment”. Except for the players and those close to the program, his achievements – discipline, strength and academics – went unnoticed. His study tables improved the players academically and caused smiles on the faces of many WHS teachers and player parents.

The annual WHS football banquet highlight once again was the comments made by the senior players as they took turns at the microphone to express their feelings on having the opportunity to be a part of the Tiger football program. The banquet was again held at the K of C Hall with Walt Bronczek serving as toastmaster. President Jordan introduced Phil Glick as the 1988 Booster Club president.