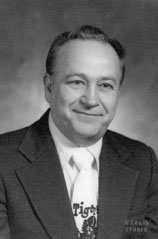 The Massillon Tiger Football Booster Club celebrated its 50th anniversary in 1983 with Ed Annen serving as the 50th club president. Ed was destined to have a very busy year in 1983 as he had to do double duty. He had to handle the president’s work along with his annual duties of caring for Massillon’s live tiger mascot, “Obie”.

It turned out to be a very successful year, however, as the Tigers ended up with a 9-1-0 record including a 18-7 win over Canton McKinley. This was the 89th meeting between these two rivals. The game was also somewhat of a milestone as it gave the Tigers their 50th victory over the Bulldogs. Naturally, the game was played before a packed house at Fawcett Stadium. The Tigers only defeat of the season was a 14-10 loss to Akron Garfield.

1983 also included a visit home by Paul Brown who came for the fifth annual Paul E. Brown Scholarship banquet. Coach Brown was quoted as saying, “This is my home. I’ve always said Massillon was the best job I ever had. If it did some honest to goodness things for people, if it brought honors, I’m proud of it”. He capped the evening by adding, “I had to come here to see you guys were taking proper care of my field.”